Wreath Between the Lines 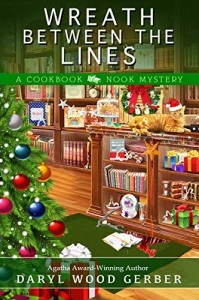 Jenna Hart loves the holidays. She's decorating the Cookbook Nook for Crystal Cove's festivities when her older sister makes an unexpected visit. But that's not the only thing on Jenna's plate - her father's good friend Jake shows up on her doorstep with news that his friend has been murdered. Jenna believes that Jake was the intended victim, so she makes a list of suspects and gets busy investigating but before she can come to any conclusions Jake is poisoned and nearly dies. Who wants Jake dead and why?

I was a little hesitant to read this since it's the 7th in a series even though it can be read as a standalone. But that cute cat in a Santa hat won me over! And I love the title of the book. Of course I would miss out on the depth of these character's stories and relationships but it didn't really bother me, it just made me want to pick up the others in the Cookbook Nook Mystery series. The writing was good, easy to read, never a dull moment. I liked the characters. The mystery itself was great. Crystal Cove sounds cozy with its charming, quaint decorated shops with their clever names. I'm glad I stumbled across this one and will definitely check out the other six!

Thank you to Netgalley and Beyond the Page for an ARC.